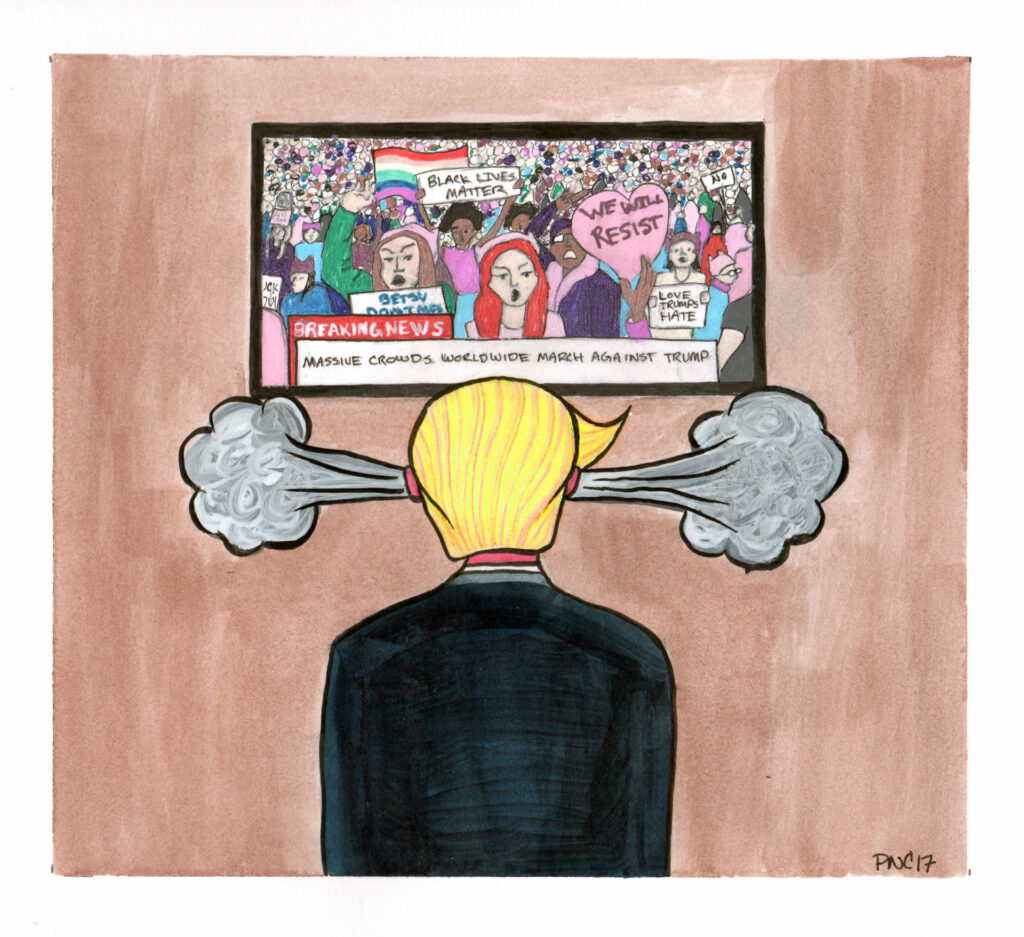 We made #45 real mad last weekend. I drew this because I really wish I could have been there to see his reaction.

I can’t express in words the feeling of unity I felt marching with so many people. I had to do a little comic about it. It’s not the best political cartoon I’ve ever done, but it was therapeutic to draw it. I don’t know what to write about the women’s march that hasn’t already been said. It has since been covered in great deal by every news outlet around the world.  I can tell you what it was like to be there. It felt great. It felt like, hey wow, I’m not alone! I’m more then not alone. I’ve tried several times to sum up my thoughts on the Women’s March. It was an emotional high. It was historical. It was amazing.

There’s an idea that these protestors were all angry and violent. We weren’t. At least not in New Orleans. The simple act of being there together. The show of force, I think, made everyone there overwhelmed with joy. We smiled, we sang, we chanted. We danced in the street. And while there is a lot to be angry about right now, we were happy to be there with each other. To feel the solidarity there brought me hope in a year when turning on the news is depressing everyday. Logging onto facebook and seeing people I once respected either ignore what’s happening or support it, is depressing. One day they will talk about the Women’s March in history books. I will be able to say proudly to my kids or grandkids that I was there, and I marched for human rights and freedom.

Below is a picture of John Jack and I at the march with our signs. I’ve also included cleaned up pictures of our signs. I’m quite proud of the Trump Baby. I also did a full redesign of Wonder Woman for this march. I wanted to include one of my favorite superheros. Especially since she is such a pop culture icon for women and the LGBQT community. I did a lot of reach on her for this. She isn’t as polished as an illustration I would normally do. I had to speed up my process to get the signs ready. But as far as a concept I’m really proud of her. I dressed her in more traditional Scythian armor. Since that was the culture the Amazon’s where based on. I did keep the red, white and blue uniform partly for recognition and partly because I wanted her to read as defending America from racism, homophobia and sexism. She’s holding a rainbow flag shield for this same reason. I also based her physical appearance off of what they believe Scythian women would have looked like. I may at some point rework this redesign and turn it into a finished illustration. 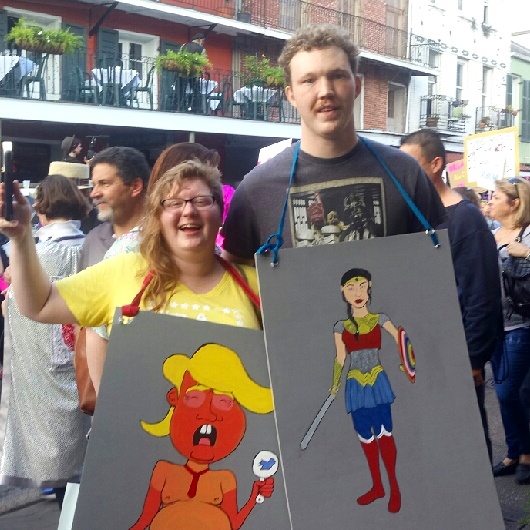 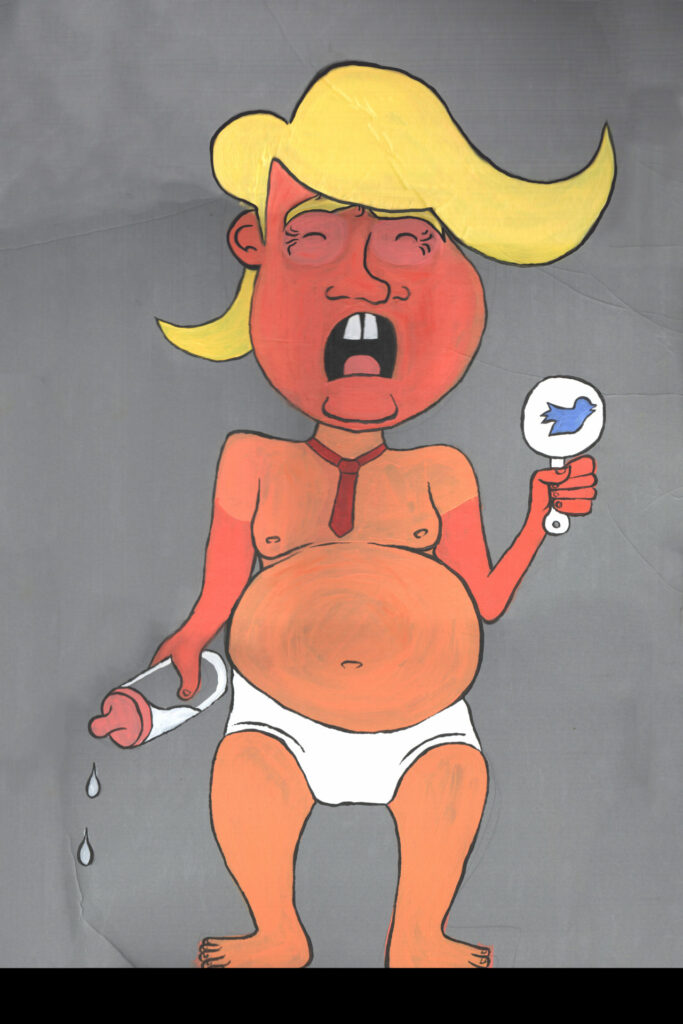 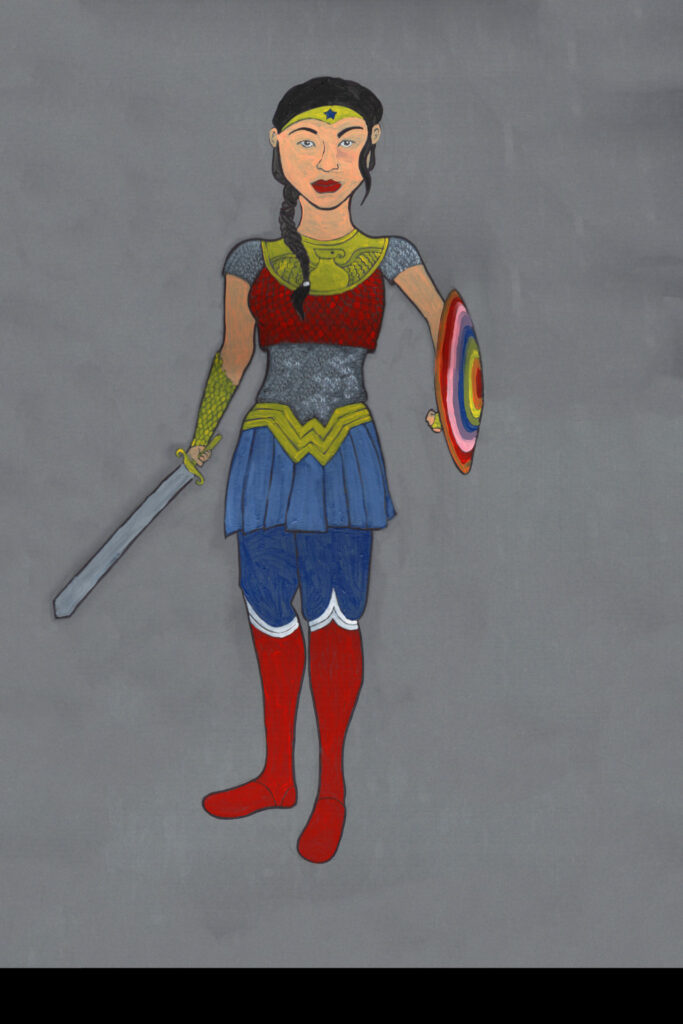